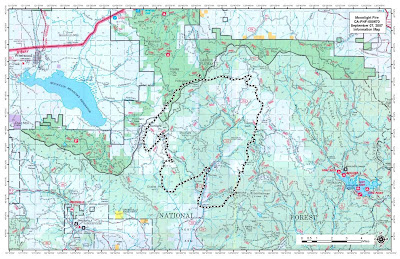 Fire made a significant run to the Northeast and East last night. It made it to the Browns Cabin area,and Lone Rock Valley. Acreage and any structure loss is being evaluated this morning. Dozer Bosses are needed for contingency efforts and direct/indirect attack. Air tankers are critical to slow advancing fire. With active fire behavior throughout the night time hours, air tankers are critical during the morning. Type 1 crews and Division Supervisors are critical for holding of established line, construction of direct line and burnout operations. The fire was very active in the Diamond Mountain area and pushing Northeast to the Red Rock Lookout.
Significant events today (closures, evacuations, significant progress made, etc.):

Fire made a significant push towards Antelope Lakes area. Antelope Lake campground was evacuated. Evacuation orders remain in effect in the North Arm of the Indian Valley and for small, isolated parcels to the East, including Taylor Lake, Wilcox Valley, and Franks Valley. Precautionary alerts have been delivered to residents of Taylorsville and Genesee Valley, and North Valley Road to Pecks Valley in Greenville. A Forest closure is in place to ensure safety in the vicinity of the fire. All major highways remain open, however most Forest roads are closed to access.
----------------------

"A favorable shift in wind patterns has allowed firefighters to make progress on the Moonlight Fire. While containment is still 8%, growth was kept to a minimum overnight.

Prevailing light winds coming from the southwest are expected for the next 3-4 days and will provide some fire stability. Residents in Susanville, Janesville, and the Doyle areas should expect to be inundated with smoke. However, residents in Greenville, Taylorsville and the North Arm area should see significant smoke leaving the valley during the day with some settling in the evening."

Thank you for the compliment Henry.
Mike

I echo the sentiments of candace above, but I would go further...

you guys are freaking ninjas in the best sense of the word.